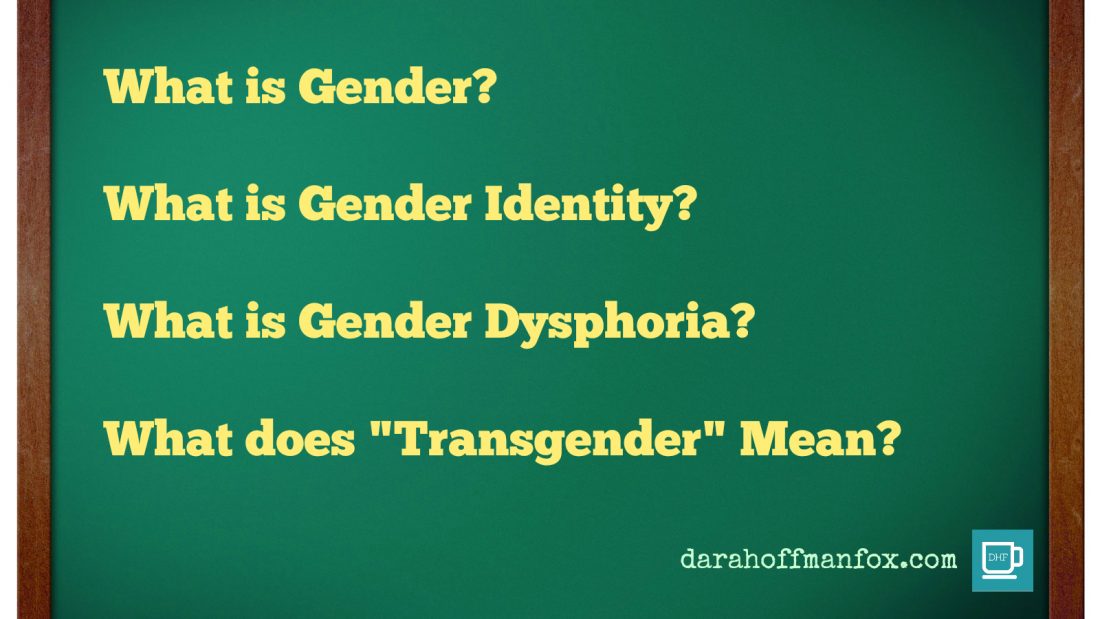 The following is a sneak peak at one of the chapters in my upcoming book You and Your Gender Identity: A Guide to Discovery (publication date of September 2017).

For those searching for answers about their gender identity, it can be helpful to know definitions of the various terms that could be used to describe one’s experience. In this section, we’re going to look at the terms transgender, gender diverse, nonbinary, and gender dysphoria.

Over the past few years, we have seen shifts in how the term transgender is used to describe one’s experience of their gender identity. Keeping this in mind, what follows are examples of how transgender is currently being used. As you read through them, be mindful that:

Transgender as an Umbrella Term (a.k.a. Trans)

This perspective goes with the idea that the word trans means across or beyond. Therefore, trans-gender means, in this case, you are going across or beyond the gender you were assigned at birth, with the destination varying greatly. This is why there are so many options beneath the transgender umbrella. Both nonbinary (e.g., agender, genderfluid, genderqueer) and binary (i.e., transman, transwoman) identities can find a home within this definition of transgender.

This term can simplify one’s search for answers about their gender identity. The umbrella gives multiple options from which to choose. Knowing there are so many others who feel they fit within the context of that umbrella can help bring someone a feeling of community, belonging, and relief.

However, this term can create confusion by lumping all gender identities and gender expressions into one category. The general population may not understand there are differences between how everyone under the umbrella identifies. It can also frustrate people who have a specific gender identity and don’t want to be “lumped in” with other gender identities beneath the umbrella.

Transgender in Reference to Medical Transition (a.k.a. Transsexual)[1]

This perspective pertains to those who feel transgender describes someone who is (or will be) taking medical steps to align themselves with their gender identity. These medical steps can include hormone therapy, hair removal, and a number of surgeries.

This definition of transgender is what our current mainstream media profiles most frequently; therefore it comes with unique benefits and challenges. The average layperson is being taught that to be transgender is to transition medically and socially from their gender assigned at birth to the other side of the gender binary.

For some this assumption can be useful. If this mainstream description of transgender fits who you are, then it may be easier for others to comprehend what you are going through. However, if you identify as transgender but do not fit the narrative that is being popularized by the media, this could make it more challenging for you to convey your personal experience to others.

Transgender as a Descriptor of a Medical Condition

Some prefer to use the term transgender only when describing what they see as a medical condition relating to the discrepancy they feel between their gender assigned at birth and their gender identity. For instance, if you were assigned male at birth and your gender identity is female, you would use the descriptor of transgender only in the context of working with mental health and medical professionals. Otherwise you refer to yourself as being female or a woman.

Everyone has the right to identify however they choose—if this is a perspective that you connect with, be sure to look at whether this desire to separate yourself from the term transgender is empowering, or if it stems from a place of internalized transphobia (Becoming Aware of Internalized Transphobia, {page TK}).

Do you connect with any of these descriptors of transgender? Do you feel disconnected from any of them? If so, why?

There are individuals who experience discomfort with their gender assigned at birth but feel the word transgender doesn’t accurately describe this feeling. Gender diverse is one of the options available to those who are seeking a way to describe their experience without having to put themselves into a category they feel doesn’t truly fits them.

Gender diverse describes an individual who embodies gender roles and/or gender expression that do not match social and cultural expectations. Terms such as gender nonconforming, gender variant, and gender creative can also be used to describe this experience.

Examples of this can be frequently seen in the gender expression of today’s youth. There are more children, adolescents, and young adults breaking gender norms (both consciously and without awareness of doing so), especially as more parents are encouraging and supportive. As a result, more youth are having the freedom to gender-bend without being policed, as well not being prematurely labeled as transgender (although parents are still strongly encouraged to listen for any indications from their child that they may be questioning their gender identity).

Learning there is an option like gender diverse can bring individuals who connect with this identity a sense of relief by validating their feelings of discomfort with the norms placed upon them as a result of their perceived gender discomfort.

It is important to note that someone can identify as both transgender and gender diverse. This could look like someone who doesn’t feel aligned with their gender assigned at birth in addition to feeling drawn toward bending the rules of gender expectations.

When it comes to your own experience of gender, do you feel any connection to the term gender diverse? If not, why?

Like gender diverse, the term nonbinary carries power to expand gender options. It can be the answer someone is looking for but didn’t realize it even existed. We’ll be exploring this in depth in the next section, Nonbinary Gender Identities.

Dysphoria, as related to medicine, is defined as “an emotional state marked by anxiety, depression, and restlessness.”[2] When someone experiences these types of feelings in relation to their sense of their gender identity, it is referred to as gender dysphoria.

The use of this term has increased over the past several years due to:

The term gender dysphoria has been around for several decades. It was coined in 1974 when Dr. Norman Fisk, in an effort to broaden the definition of what it meant to be transsexual, opened a clinic where persons could be diagnosed with “gender dysphoria syndrome” and therefore have a higher chance of being approved for “sex reassignment.”[4]

Although the term gender dysphoria is used for diagnostic purposes by therapists and medical professionals (which has helped in the fight to have insurance companies cover the costs of transgender health care), it is being used in other contexts as well. Many of my clients use this term as a way to describe the discomfort they are experiencing with their gender assigned at birth (e.g., “I’m feeling very dysphoric today,” “That incident brought up so much of my dysphoria”). This feeling of gender-related dysphoria often surfaces as the result of something that happens in a social situation, and/or when experiencing a strong feeling of discomfort associated with their physical body that is specifically related to their gender.

It’s important to note that someone who identifies as transgender can experience gender dysphoria at different levels and in different ways, or maybe not even at all. However, they may still be asked to use the term with certain mental health and medical professionals for the aforementioned diagnostic purposes, with the goal being medical transition.[5]

From what you just learned about gender dysphoria, does this sound like something you might use as a way to describe your experience?

[1] Transsexual has developed a negative connotation in many respects and therefore should only be used if it is how a person asks to be identified.

[5] Ritchie, Ronnie. “You Can Still Be Transgender If You Don’t Feel Physical Dysphoria – Here’s Why.” Everyday Feminism.

Finally, a Name for My Nonbinary Gender Identity!

Reader Q&A: Do I or Do I Not Have Gender Dysphoria?

Ask a Gender Therapist: How Do I Know If I’m Transgender?