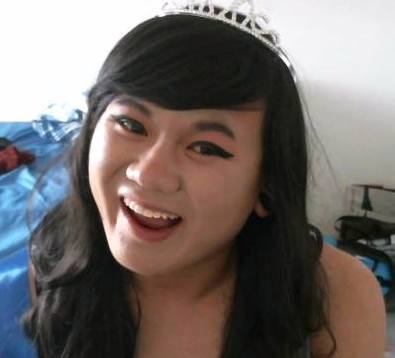 Well, I have some good news and some bad news.

The good news is that this past Friday a transgender teen named Scarlett Lenh was awarded the title of Homecoming Princess at her high school right here in my town of Colorado Springs, Colorado. The story has already gone viral.

The bad news is that much of the journalistic reporting done on this story, like many recent transgender-related news stories, is inaccurate, sensational, and dangerous.

Yes. When un-informed persons read sentences such as, “Scarlett, however, is biologically a guy. She was born (male birth name) and this school year started identifying as a female transgender,” it gives them permission to throw a fit, pass judgment, and claim “unfair!”

Seriously, if you can stomach it, read the comments on just one of the stories here.

These quick fixes would have gone a long way towards educating the masses on what it means to be transgender:

But this article isn’t for reporters to learn how to accurately report transgender-related news stories. I already wrote about that last year, when another Colorado high school student was subjected to, frankly, more lazy journalistic reporting.

I was inspired to write this by, well, Scarlett herself!

I was able to connect with her on Facebook this weekend. Hold on, this is too cute not to share: 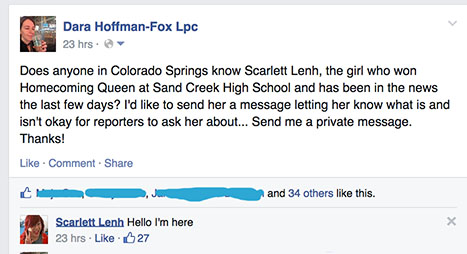 I let her know I was going to come up with advice on how to handle this media frenzy. She was very appreciative that I reached out, saying she is glad to know that people have “got my back.”

As I was coming up with this for her, I realized this is something that others could benefit from as well. That this isn’t the last time this is going to happen.

So, with Scarlett’s blessing, I’m putting this out there for those transgender teens out there who will have their moment or two in the media spotlight (I started it off as a message to her, which is why I’m keeping it in it’s “letter format”).

Firstly, congratulations again on winning Homecoming Princess! It must be awesome to know that so many of your peers see you for the amazing girl you are.

That being said, I know it’s unfortunate to now be seeing that there are adults out there who aren’t as understanding.

I know you’ve already done interviews with the news, but it’s possible this story is far from over – at least in the eyes of the media.

Now, from what I can tell, you actually have handled the media’s questions like a pro. I’ll mention some of my favorites below. 🙂

However, just in case any of this can help you, or someone else in the future, in no particular order here’s my “10 Tips” on how to handle the media attention in the coming days:

1. Whenever you are interviewed by the media have an adult with you who has your best interests in mind. This adult can be a family member, a teacher or administrator from your school, a parent of a friend, a coach, a counselor… Someone who you can trust and will know when a reporter has asked an inappropriate question, or will remind you of helpful details.

For instance, chances are there’s someone in your school system who can help you with this, since this has now become a big enough story to involve them too.

2. Speaking of inappropriate questions…If a reporter asks you something that you are feel is too personal or irrelevant, you don’t have to answer it. For instance, about your sexual orientation. I noticed that one of the reporters asked you about that and it made me physically cringe!

However, your answer was perfect, when you said for the last year and a half you haven’t been attracted to anything. 🙂

It should not have to be your responsibility to let a reporter know that they have crossed the line into your personal business. But just in case they do, don’t be afraid to stand your ground and say, “Sorry, that’s personal.” Or surprise them with an answer that shows them just how invasive it is to ask that.

The media is still having a hard time understanding that a transgender person’s private life is not the business of their audience, unless the person being interviewed is okay with that.

3. Don’t read the comments on any of the news stories! It sucks because there are actually a lot of really supportive comments on them. But there are also nasty ones. You don’t need that sort of negativity in your life. One idea is you could have a friend copy and paste the positive comments for you and put them in a message to send to you.

4. Find words and phrases that describe what you are experiencing, when it comes to your gender identity, and memorize them. That way you’ll have them ready in case you are interviewed again, or if you are challenged by a parent, community member, classmate, etc.

Everyone is different, when it comes to how they’d describe themselves, such as, “I was assigned male at birth but I’ve always known I’m a female,” or “My anatomy is male but my brain is female.”

I loved what you said about people being themselves and not being uncomfortable in their own mind and body. It’s a shame that the reporters didn’t focus more on that part of your story – it’s such a positive message and shows just how mature you are!

5. Now that you are in the “public eye” you can actually use it to your advantage and find new supporters! You might be contacted by a lot of people (like me :)) who want to know how they can help. Try to get an adult to help you keep track of all of those offers and to decide which ones to follow up on. It can get overwhelming, so getting help with that is key.

6. Take time to rest, recharge, and have fun. You’ll get burnt out if you don’t. More than likely the media attention for this will die out within a couple of weeks, but you’ll probably have some aftermath to deal with in your personal life. Take it a day at a time, get advice and support from people you trust, and don’t forget to be your amazing self!

7. In one of the articles you mentioned it being hard to come out to your family. There’s an article on my website that might help that you can share with them that talks about what it means to be transgender. You can check it out here.

One of the hardest things about being a transgender teen can be how the parents take the news, and if it ends up causing a lot of stress. Be sure to turn to your school counselor, as well as any nearby support groups, friends, and other trusted adults to help you through this tough time. It can be hard for parents to understand this and to get used to it, but hopefully over time they will be able to get there.

8. Although this might be different in other states, in Colorado your school and school district have the law on their side. There is an Anti-Discrimination Act that protects many persons, including transgender persons, from discrimination, and this includes in schools. They have stated in the media that they are on your side, so now you know that the law is on your side as well!

9. That being said, I’m sure you know how frustrating the whole “bathroom debate” is. Keep going to the girls restroom – the law is on your side on this one too.

It’s just about being yourself. That’s what I want to do, inspire people. I want everyone to know no matter what body you’re in or what mind set you have, being you is the best feeling in the world, no matter what.

Keep reminding people of that – at some point some of them will stop arguing with you and will see it’s really none of their business to try to “change your mind.” Maybe they’ll even learn something from you too!

All in all I think you’ve given a great example of how to handle the media attention, and many teens in the future will be able to learn from you thanks to that.

Good luck Scarlett! You’ve already made the world a better place by you being you. 🙂 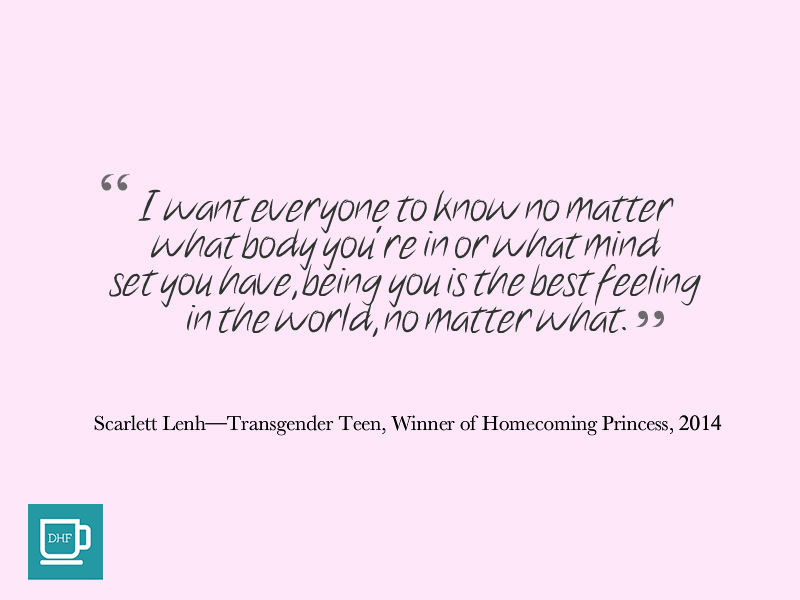 Download and save the above image by right clicking on it, saving to your computer, and then sharing on your favorite social media networks or through email!

Transgender Awareness for the Well-Intentioned: The Male-to-Female Experience

The Coy Mathis Decision: A Landmark Moment in Transgender History