In this video I share some tips on how to make the shift from “female” swimwear to “nonbinary” swimwear. This was inspired by an upcoming vacation I’m about to go on and recognizing I was in desperate need for swimwear I felt comfortable in!

Hi this is Dara; I am a gender therapist is Colorado. I also happen to identify as non-binary. So I thought it might be a good idea to start making videos that offer non-binary tips for those of you who are interested and I know a lot of you are interested.

I’ve been getting a lot of questions about whether or not somebody feels they might be non-binary or even how they can maybe explore the possibility that they are. So this specific episode is going to be called non-binary tip on swimwear.

The reason I’m bringing this up is because I had to take a look at my swimwear because it’s been a little while since I’ve had to wear it. Next week myself and my family—meaning my wife, my teenage daughter and my teenage stepdaughter as well as my wife’s parents and my wife’s sister and brother and my wife’s sister and her husband—we’re all going on the trip. Let’s just say I need to have some swimwear and I looked at my swimwear at home and all I had was a lady’s bathing suit. For a while now I’ve been wearing board shorts on the bottom—what you can get from pretty much any department stores, usually in the guys’ section. But I haven’t found anything for tops that I had felt comfortable with and this year and it was, like…a deal-breaker. I was not wearing a lady swimsuit in any form or fashion. And so I decided to do some investigating to figure out what I could wear.

So I did some research on the internet—there’s some a few good articles out there. I ended up finding a Rash Guard on Amazon. A Rash Guard is something that I think is worn typically by those who maybe are surfers and it’s so you don’t end up getting burned by the surfboard maybe or from the sun… I’m honestly not quite sure, but I just knew that I liked the look of a Rash Guard because it looks kind of like a t-shirt, but it’s made of materials that is meant to get wet. So I’m going to put a picture here of myself wearing the Rash Guard…and then I also am wearing my board shorts. 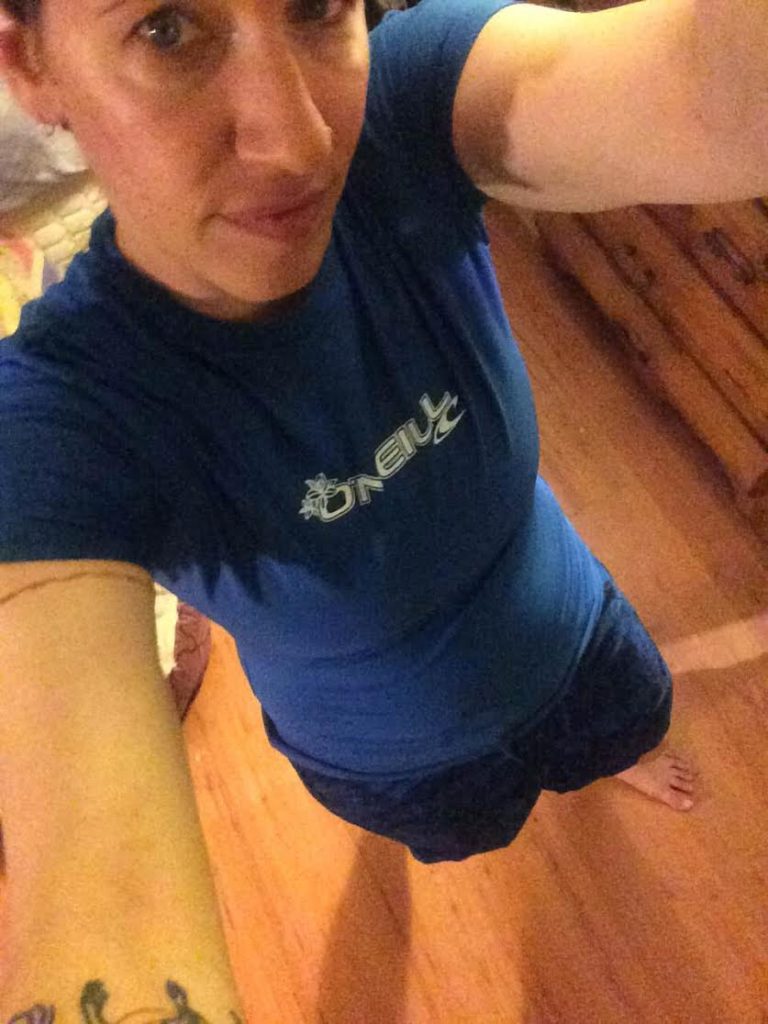 The Rash Guard is called… the one that I got has a really long name I think they just put a lot of keywords in it, so that people would find it. O’Neill, Wetsuits, UV Sun protection, women’s basic skins, short sleeve, tee Sun shirt Rash Guard.

So when I got the Rash Guard…I think I was sort of hoping it would compress my chest a bit more than it did. And I wouldn’t have to wear anything else underneath it, but that wasn’t really the case but I wasn’t necessarily thinking it would definitely do that either. So what I also had seen as a tip, is that you could wear like a sports bra or Sports Binder underneath it. So I already have what I called a Sports Binder that I use on a daily basis and also for exercising. The one that ended up getting is UnderWorks Magi Cotton Sports and Binding Minimizer Bra.

So again I already had this and this is something that I went ahead and put it under the Rash Guard to see if it would help. It looks a little lumpy but I think I’m OK with it–like, in terms of how you kind of notice the binder underneath the Rash Guard. But I decided that I would just… it was better than not having it definitely and so that’s why I decided to go with.

So the Magi Cotton Minimizer bra… Sports binder was $34.99 on Amazon and the Rash Guard that I got was $27.95. I saw a different option online that I really, really, really liked it, it was specifically even made for those who are non-binary but it after shipping it was to be almost 70 bucks, so I decided I needed to probably not be able to get that quite yet, maybe one day I’ll be able to get that.

So that’s what I’m going to wear. I haven’t been in front of this side of my family for a while. And this will be the first time they see my short hair cut and my new tattoos. They are not really new to me anymore but my family hasn’t seen them yet. Then I’m going to be wearing this more… I don’t know what you’d call it… gender-neutral swimwear. I think it’ll be fine, I’m just going to try to be normal and act like myself and not make it a big deal and my wife will be with me in case anything weird happens and I feel like I need to talk to her about it.

That’s just the example of something for me that I’ve recognized that the more I realize what it is I’m not comfortable wearing anymore. There are options out there to try to find what does work for you. So hopefully maybe some of you can get some ideas from that.

I just wanted to mention that if you are still trying to find out and figure out for yourself if maybe you identify as non-binary or if you have any questions about your gender identity, just last month published my first book and it’s called You and Your Gender Identity a Guide To Discovery. You can get it at my website… if you get it through my website, I will also sign a copy of it for you and I will be able to send you a free workbook in PDF form. You also can go to Amazon and order it there as well if you wanted to be able to get it shipped to you more quickly, or if you have Amazon Prime you won’t have to pay for shipping and I believe especially for those overseas that might be really good option. I just want people to be able to gain from the book, so however you want to get it is cool with me.

Well if you think this was a good idea to create a video like this let me know in the comments below. I can come up with more things to talk about that would be non-binary tips. So until then I’ll talk to you later.

I’m Non-Binary: How Do I Educate My Mental Health Practitioner?

Searching For That Happy Medium: A Non-binary Perspective