What Does “Transgender” Mean?

I have to admit the video for this video was spawned by my 13-year-old-step-daughter.

She brought up a good point over dinner a short while ago: “You should probably make a video about what even means to be transgender. Like, something I can show my friends at school if I wanted to explain to them what you do.”

Thank goodness I’ve got YouTube savvy family members to turn to for advice!

And so, here we go, let’s get back to the basics of “What does ‘transgender’ mean?”

Hey there, you have found the Ask a Gender Therapist video series. This is a video series where I answer your transgender questions from the point of view of a gender therapist. I’m your host, Dara Hoffman-Fox, I’m a Licensed Professional Counselor in Colorado and I’m very happy that you found this video because clearly you have a question on your mind and my hope is that I could provide you with maybe a bit more answers than you had before you watched this video.

So, the question I’m going to address in this video actually was presented to me by my stepdaughter. Let me explain…

We were having dinner a couple of weeks ago and I was talking about this YouTube series and I was kind of mentioning a few things about what I wanted to use it for. My stepdaughter is very savvy when it comes to YouTube and the different ways people use it.

She said, “You know what you probably need to do is answer the question ‘what does transgender mean?’” I realized I had not made a video about that yet.

She said she would be at school and somehow I would come up in conversation and she mentions that I am a therapist who works with a lot of transgender clients and if her friends are like, “What’s that? I don’t know what that means,” she wanted to have a video that she could then refer them to so that they could find out.

So that made me think there’s probably many, many others out there who could use a little bit of explanation about that.

The first thing I want to address about this question is that there is not one definition for “transgender.” This is really, really important to keep in mind as you watch this video, because in the end, especially because this is something that is finally being talked about so much now, that there are so many definitions and every person and individual has their own definition of what it means to them. But don’t worry, I can still go ahead and give a few examples of what this means so that maybe you can find your answer.

First of all, there is the transgender umbrella. So picture an umbrella that says ‘transgender’ on it and underneath it are many different identities. 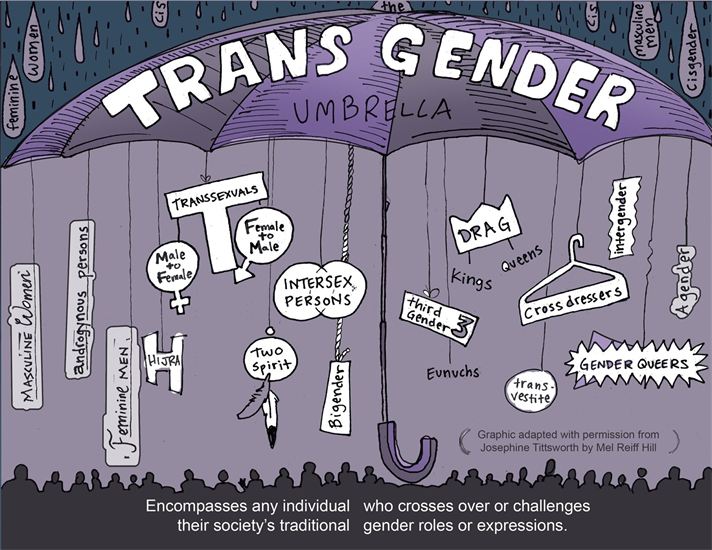 Think about it how the word “trans” means “across” so therefore, it means “across gender.” So it means going across what gender really is usually defined as. Underneath the transgender umbrella you can have those who are male to female, female to male, non-binary, agender, two-spirit, drag queen, drag king, all sorts of definitions under that.

The next definition of transgender we are going to talk about is transsexual. This is a word that, for a lot of people, has fallen out of favor because it is something that can be very medical or psychiatric based, because it has the word “sexual” in it, it can be confusing as to what it means.

But it is true that a lot of people do still use the word “transsexual” because they want to make sure that when it comes to defining themselves that people understand that the level of discomfort that they feel with their assigned gender at birth and their true gender is so distressing that they need to be able to use medical means to transition. That would mean using hormone replacement therapy, and/or having surgery.

Again, this isn’t always 100%, sometimes someone is going to use “transsexual” in an example that doesn’t necessarily mean this, but I am talking in general that this is what transsexual means.

That’s another way someone might use the word transgender as a way to define themselves. They put it out there as a part of who they are.

The fourth definition I will give you for transgender is purely as a medical condition. I have spoken with a lot of people and I have had several clients who only want to use the word transgender when it comes to their medical needs.

For instance, if someone is going to be starting hormone therapy and/or will be having surgery, they know the word ‘”transgender” has to be used at some point, so that either the surgeon or the physicians know this is why the client is getting this type of treatment.

On the Merriam-Webster website it was not accurate. And I then moved over to dictionary.com and it was even worse over there!

What I decided to do is I am going to read for you, word for word, the definition of transgender as put out there by award-winning author and blogger Matt Kailey who passed away earlier this year. But he has an amazing website called tranifesto.com. Here is what he defines as transgender and not surprisingly, he actually breaks it up into three different definitions.

The first one says,

Transgender refers to a person who’s gender identity and physical body are not in alignment or do not agree either all or part of the time. This is a narrow definition and more so than I prefer but many people prefer a broader definition.

The second one says,

Transgender refers to a person who transgresses the gender norms of Western culture’s binary gender system either all or part of the time, and either intentionally or unintentionally. While everyone transgresses gender norms at one time or another, this definition generally encompasses those people who are viewed negatively or who are discriminated against because of their gender identity or gender presentation.

His third definition is,

Transgender encompasses both definitions above and also includes transsexual people or those who have made changes to their physical body to bring the body into alignment with their gender identity.

So I would say that my definition of transgender fits pretty close to what Matt was talking about.

For the most part, the simplest way I can explain it is, if you are comfortable with using the word “transgender” for yourself, find your own way to use that. Make sure that is something you decide that you want to use as part of your identity or as a way to identify yourself. Don’t do it because someone else tells you that you should.

To wrap this up, I wanted to put this question out there to you, “Why does it matter to know what the definition of transgender is?” Whether it’s for yourself or for somebody that you know is telling you they are transgender.

A couple of things I want to mention; first of all, what this usually means is that someone has heard the word “transgender” and then they hear a little bit about what it means. Maybe they have watched a video, or met somebody in person. Or they heard a news story and something about that connected with them. Maybe it’s the first time they ever heard of it or maybe it’s just the right time in their life where they finally hear it and they say to themselves “That sounds kind of like me,” and they want to explore it further.

Knowing that if somebody comes to you in your life or if this is you, and this is going on with you, it’s really important that you honor that and take some time to explore the truth of that.

Whatever that means that’s still something to be decided. But make sure you believe this, if it’s something that is not going away.

Well, hopefully you were able to get some insight into your question. I also made a different video that is called How Do I Know If I Am Transgender? which might be a nice little extra piece that you want to add to this to watch. I’ll be sure to put the link in the notes for this video.

It’s also probably pretty handy if you go ahead and subscribe to this video series when you click the subscribe button under this video because. Then you will definitely get updates as to when I put new videos out there.

If you have a question that you would like for me to consider for the “Ask A Gender Therapist” series, the best way for me to receive it is to go to my website and fill out the contact form and send it to me.

I do have a lot of people that are putting their questions in the comments for YouTube. And, although there is nothing wrong with that, I will admit that it’s a little more difficult for me to organize and manage and keep track of those questions and some of them definitely fall between the cracks. By all means, if you can, go ahead and fill out that contact form instead.

I have seen that happen on quite a few of these videos and I think it’s pretty awesome. 🙂

Ask a Gender Therapist: Difficult Trans-Related Conversations & Tips on How to Have Them

Ask a Gender Therapist: Am I Transgender Because of Childhood Events?

Ask a Gender Therapist: Coming Out as Transgender to Family & Friends

Ask a Gender Therapist: How Do I Know If I’m Transgender?