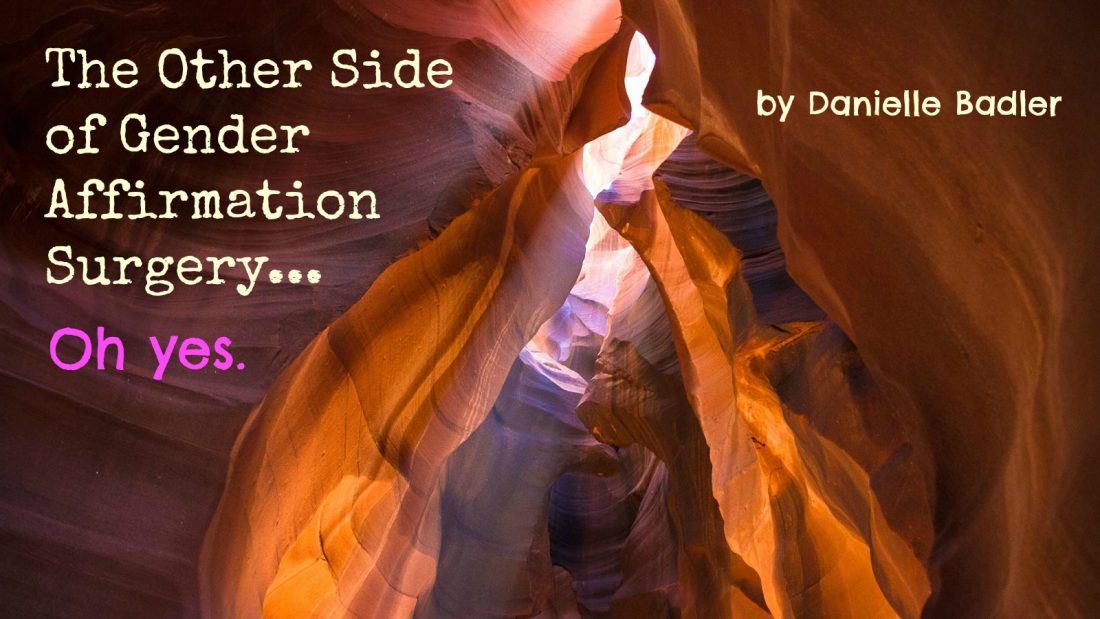 Complete. That’s how I feel. Complete. For the first time.

No more feeling like a science project. Or a work in progress. Or a hybrid human. It’s behind me. And it feels great. Really great.

Two days before surgery, Deena, my first-week partner in crime, and I had a consultation with both docs, Marci Bowers and Joel Beck.

Marci’s office has a map of the world. With pins stuck in it from what seems like everywhere on the planet. A nurse asked me to add a pin for my home town, and I did. Marci and I had a nice chat. She saw no issues.

Nor did Joel. He had a machine that takes a three-dimensional view of your torso and then… you press a few buttons and out pop… breasts. They sort of swell out. What a concept. We spent some time comparing various sizes and shapes… on me. Virtually. And, lo and behold, the three of us voted unanimously for the same size and shape.

Ask me how the surgery was, and I don’t have the vaguest idea. As my speech coach, Lynn Skinner, advised, Deena and I queried the anesthesiologist about what he was planning to use, and he rattled off a list of compounds we could hardly recognize. But we also asked for the thinnest trachial pipe he could use. And he was fine with that. And that literally was that. I was wheeled into the operating room and… I don’t have a recollection of anything else, even of nodding out.

I woke up in recovery, feeling fine… er, correct that, feeling nothing. No side effects, not much sensation anywhere. I was wheeled up to my room, had something light to eat… broth? Maybe. And it was lights out.

The first day post-op, I couldn’t move if I wanted. Luckily for me, they didn’t want me to. My abdomen was numb. But my chest hurt like hell if I tried any movement whatsoever.

Both docs came by and pronounced great satisfaction with their work.

The second day post-op, I forced myself sideways and gingerly rolled my feet to the floor. When I stood up, what do you know, I felt remarkably solid. Deena led me on the first of four separate walks around the floor that day.

And I took a shower, sort of. They had this crazy contraption in the bathroom that sort of worked. And I was sort of able to wash myself. Including my hair, which was a surprise to me – I had expected no range of movement to the top of my head. But all they had was Johnson’s Baby Shampoo, which was useless.

The third day post-op, I was discharged. One minute, the nurses, who were terrific, were taking my vitals. The next minute I was struggling into my leggings and zip-up sweater. It was an effort to get into the car – ass first then slowly pull my legs over the door sill. But I did it.

Deena and I got back to the hotel and sort of looked at each other, with “What do we do now?” expressions. We decided to take a ride, to Palo Alto, for lunch. I braced my feet against the car’s firewall, to keep pressure off my bottom. But I made it.

The catheter made for bathroom stops on a regular basis. But it worked as advertised.

And there I was, back out in the world, pondering the transition from blood pressure monitors to what I’d like to accompany my kale salad.

Deena left early the fourth day, as planned. She was a great asset. And I would not go through the immediate pre-post process alone. She was able to sleep in the room, take care of things and be there when you need help.

The fifth day, I drove. I drove us to Sausalito for lunch. And shopping. And we began communing. Which was perhaps the biggest surprise of the whole trip. Everything else I had prepared myself for, at least as best as I could. That I would get along so well with my younger sister, who I had systematically terrorized when we were young, was just a joyous event.

Susan asked me why I was so horrible to her, growing up. I said she was probably a convenient punching bag for me to take out my frustrations, my life frustrations. I told her I was sorry.

The sixth day it was back to the docs. Marci was away, which she had told me she would be. But the nurse led me through the mechanics of dilating. She first had to take out the catheter and packing, which I’ll admit was strange and uncomfortable. The process stung. But just for a few seconds.

I asked the nurse, uh, how do I pee? Do I need to do anything special, or what? And she laughed. She said, oh no, it operates the same way. You’ll get it.

And she was right. I went four times that afternoon.

We also met again with Joel Beck, and he sold me some cream for irritation on the incision lines. He also said everything was progressing well.

The seventh day we drove into San Francisco and had lunch with a friend. That night we had dinner with a couple I knew. They came in their Tesla.

The eighth day, it was reported that a funny wooden boat filled with animals was sighted near the Golden Gate Bridge. It was “apoca-storm,” according to newscasts. But to us born and raised Easterners it just looked like a very rainy day. Which meant only one thing, a visit to a mall.

The ninth day, we went back to San Francisco, to the Walt Disney Museum, which is not to be confused with the company. This little gem is located on the grounds of the Presidio, and is funded by Walt’s actual family.

And so, here I am, on the 10th day, in the lounge, waiting for my flight home. I can finally sit without too much discomfort, whatsoever. My sister just headed to her flight, having done yeoman duty handling our bags at check-in. I have BFF Paige meeting me at the luggage carousel to handle the weight of things on the other end.

But, otherwise, my abdomen is still sore, and there’s still some black and blue, and the super deluxe training bra is getting rapidly old, and dilating is rapidly becoming a 15-minute chance, three times a day, to ponder my life, in real time.

What do I see? That this truly is the end of the line for the physical portion of our program. I’m glad. And proud. And relieved. It’s been almost two and a half years, if one starts from when I began hormone therapy. A steady process. Sorting out road bumps. Planning next moves. Dealing with surprising tangents along the way.

And if I could wind back the clock, and ponder doing it again, knowing what I know now, I’d still decide to move forward, in a heartbeat. 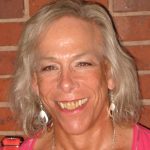