This Trans Voice: The Truth Will Set You Free, by Emma 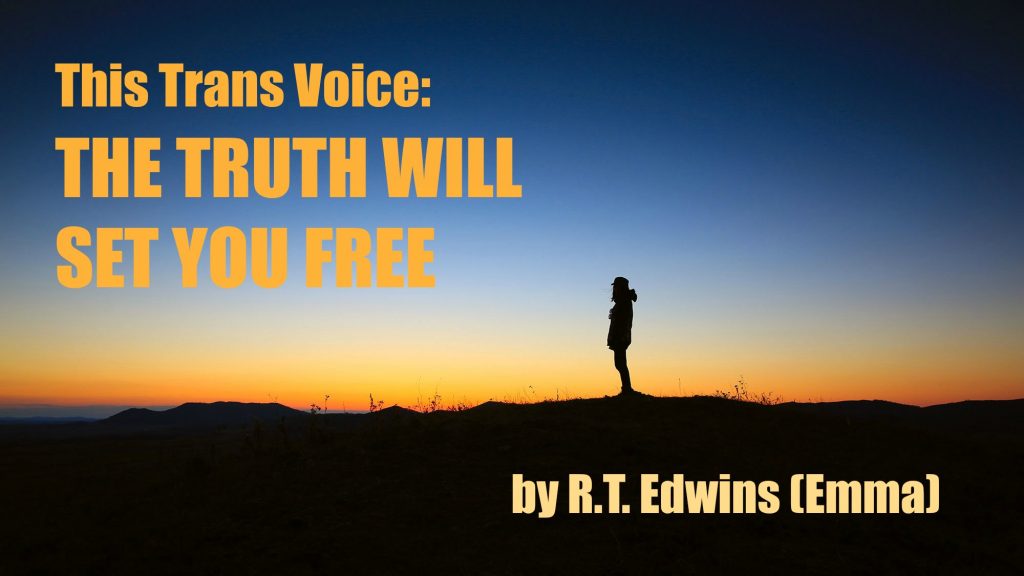 Note: The blog mentioned in the article is Trans-Advent: A Blog Detailing the Life-Changing Realizations of What it Means to be Transgender

“And you will know the truth, and that truth will set you free.”

The fact that this blog exists at all, is indicative of a huge stepping stone in my acceptance of the truth about myself. I have spent the last 29 years playing a role, one that was given to me at the time of my birth and one that has never felt right.

In short, I have been pretending to be a male.

Even as I write these words there are complex emotions running through my body. An odd mixture of relief coupled with fear and anxiety. It is difficult to even admit out loud to myself, and especially in written form for all to read, that I’m not what I appear to be. I have gotten so good at hiding the truth, at pretending to be something I wasn’t that I’d nearly forgotten who I actually was. I’ve become so adept at wearing the mask of masculinity that I even almost convinced myself I’d moved beyond my feminine desires/emotions, but with all things, the truth always prevails.

So what is the truth? The truth is that inside of this male physique, beneath the facial hair and deep voice, there is a frightened and terrified woman. A woman who has always been there, locked in a physical form that never felt right, and that never quite felt like home to her.

Despite those fears and worries, this woman has decided that she’s hidden long enough and that the male façade can no longer be maintained.

I’d like to say that I accepted this inner woman long ago, that I’d embraced her as her beautiful self for all that she was, but that would be far from the truth. In actuality, it has only been through the cascading failures of all the denial mechanisms I built through the years that I’ve finally come to accept the truth about myself, and that cascade began with a dream.

I won’t relate all of the details of the dream here, because I feel that most of them are irrelevant to the purpose of this blog, but suffice it to say that I had a dream that I was a physical woman (yes, lady bits and all). The dream alone probably would not have been enough to undermine all the denial mechanisms constructed throughout the years, but the accompanying emotions that came with the dream were a different story.

You see, it is one thing to mentally repress emotions and to lock them away during your conscious hours, but the realm of the subconscious holds no self-controls. In the waking state it is somewhat easy to tell yourself that your desire to wear nail polish isn’t “manly” and should be avoided, but the dream-self holds no denials about the ways it feels about things, and that’s where the events of the last 8 days began; the emotions I felt during that dream.

What were those emotions, exactly? Well, they were manifold in their manifestation. There was an unfathomable combination of relief, peace, acceptance, and at-oneness. I felt that, for the very first time, I had been whole, that I had finally been able to express through physical form what I’d known to be true for as long as I could remember.

It felt RIGHT to be a woman. It felt GOOD to be a woman. No, It felt WONDERFUL to be a woman. It felt like I’d finally found my way home to the place that I knew I belonged after years of wandering in confusion. It was the culmination of countless desires being expressed in perfect harmony with my being… but it was just a dream, right? How could a dream excite such powerful and amazing feelings by itself?

This was my quandary as I got into the shower to get ready for work and was forced, yet again, to behold the physical parts to myself that didn’t match what I knew inside. This was the quandary that kept circling through my mind as I went to work in a haze of confusion and torn emotions.

For the first time in a very long time, I had to really, truly reflect upon my gender.

I’d always joked to myself and to my friends that I was really a woman trapped in a man’s body, but was it really a joke? The pervasive emotions that I felt as I reflected again and again on how wonderful it had been to be a physical woman in the dream told me that maybe the joke was on me.

I was the joke.

I was a woman and it wasn’t anything new. The more I reflected upon my past and all the secret times I’d tried on women’s clothing, put on make-up, or had painted my nails, the more I realized this had been here all along.

More alarming still was the fact that as I became more and more aware of the truth (which I’d been running away from for a very long time) the more the deep sadness inside of me started to abate.

You see, prior to this realization, I had suffered more than a decade’s worth of depression and melancholy. Most days I was able to master my emotions and function like a “normal” person, but the sadness was always there, hiding in some dark recess of my mind ready to pounce at any moment.

I never understood the sadness, not really. I would battle with myself, trying to convince myself of all the good things in my life, yet the melancholy would never leave no matter how wonderful my external life became (and it has been a blessed life, for which I am very grateful).

You see, I’d suffered from this malady of depression for so long that I could no longer recall the reason it existed, it merely… was. As hard as I would dig into my mind or my life, I could never find the root because the denials I’d constructed were too powerful to circumvent.

I could maybe find and address the temporary conditions that had brought it out of hiding, but even that only caused the feeling to subside for a while (maybe a day, week, or even a month or two).

That is, until now.

I don’t know how to really put this into words, but I can feel that the object that’s been poisoning the well of my emotions has finally been brought to light. The source of my years of depression were all rooted in one simple truth, I wasn’t being honest with myself… until now.

This is why I have created this blog, so that I may begin the process of being honest with myself and to, hopefully, inspire others like me to be honest with themselves too.

I’m also writing this in the hopes that I might bring about empathy in people who do not fully understand what it means to be transgender.

I won’t pretend like what I’m saying isn’t going to be a shock to some people. Most Americans believe that there are just two genders, male and female, and that those two genders absolutely correspond directly to the sex a person is when they are born. It has only been in recent decades that the existence of transgender people has come into the spotlight of our society (at least, partially).

Transgender people, however, have always been around (historical records indicate as much) and many cultures around the world currently acknowledge a gender spectrum beyond the binary assumptions of American society, but its acceptance in the United States has only just begun.

It is precisely this absolutist-binary mentality about gender that’s caused me so much grief over the years. Had I been born in a culture that accepted and fostered little boys who acted like and wanted to be little girls, things would have been drastically different for me.

I wouldn’t have been forced to conceal the very natural feelings I had as a child. I wouldn’t have been forced to act out a gender role that never felt right or comfortable for me. When we were separated in school as girls or boys, I could have maybe had the option to pick instead of being pressured into something without a choice. Perhaps I could have avoided the years of feeling like an alien in a group of boys, or could have openly acknowledged the little voice in the back of my mind that always said “but I’m not” when someone verbally assumed I was a boy.

I’m writing this because I know there are men and women out there, hiding in the wrong bodies because they are too afraid of what it means to come out, or that there are people out there who don’t fit any of the typical genders who need reassurance that it’s okay to be themselves.

I’m embarking on a journey that is both terrifying and liberating, one that will have untold consequences on my life as it is right now. This is the advent of my transgender journey, and I hope you’ll come with me so that we can all learn a bit more about ourselves and each other. 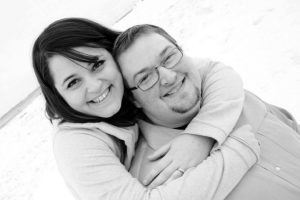 R.T. Edwins (Emma), graduated from the University of Northern Colorado in 2009, where she studied Sociology and Anthropology before moving to Minnesota to continue her education at Hamline University where she obtained a post-bachelor’s certificate in paralegal studies. Since her graduation from Hamline in 2011, Emma has worked in the field of Intellectual Property law but spends her free time authoring two blogs (Trans-Advent and There Are No Borders) as well as the science fiction series, Chariots of Heaven Saga. (available on Amazon and iTunes)When she is not working or writing, Emma devotes her time to volunteering at a local mental health clinic which provides mental health services for the impoverished or underprivileged.Emma can be reached at rtedwins@gmail.com or through her author website at www.rtedwins.com.
Spread the word- share this post

This Trans Voice: “Just Trying to Live” by Bella Rose