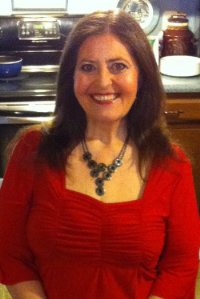 This Trans Voice: The Spouse’s Perspective

I’m excited to bring you the latest installment in “This Trans Voice”! This is a guest blogger opportunity for persons who are transgender (as well as those who are a part of their lives!) who would like to share their story and insights with you.

I’d like to introduce you to Bobbie Thompson. Bobbie is the author of My Husband Looks Better in Lingerie Than I Do… DAMN IT. The book serves as a companion memoir to Hung in the Middle: A Journey of Gender Discovery, which was written by her spouse, Alana Nicole Sholar.

From Bobbie’s biography on Amazon.com:

“Bobbie’s is a transition story … not a story of physical transition as are most stories about transgender persons, but a story of transition of perspective … from ignorance and misunderstanding to educated and informed.”

Bobbie and I became acquainted through Facebook here recently and quickly realized we needed to find ways to collaborate. She wrote this piece just for the readers of this blog, and I am so excited to share it with you!

You can learn more about Bobbie on her website, www.myhusbandlooksbetter.com, and about Alana at www.hunginthemiddle.com.

Enjoy, learn, and pass on!

The Same … REALLY?
by Bobbie Thompson

But, I could understand. I understood because that is exactly where my relationship began with Alana when I saw her for the first time in 2006. I didn’t like her even though I had known Alan for 25 years or so, and we had even enjoyed an intimate relationship in the mid-1990’s. One reason I didn’t like Alana was because when she was around, she took Alan away from me. I told her I could be her friend because I can be friends with practically anyone, but, I also told her that she and I could never be as close or share the type of relationship Alan and I had shared.

Because I knew nothing about the experience of being transgender, my initial understanding of Alan and Alana were as two separate individuals … one male … one female … with two different personalities, mannerisms, and especially styles. The only thing I knew about Alana was that Alan wanted to ‘change’ to become her. I think maybe it’s that word ‘change’ that bothered me. To me, that meant my friend and former lover was in the process of becoming someone different.

When you change your clothes you put on something different. When you change the tire on your car you put a different tire in its place … the tires may be very similar, but they are obviously two separate … and different… tires no matter what similarities they share.

But as I spent more and more time with Alana, it was actually the similarities shared by both Alan and Alana that somehow surprised me. For example, I agreed to attend a party with Alana. As I watched her interacting with the other people in the room I had the thought, “Wow, Alana has a very charismatic personality … just like Alan.” Then I giggled to myself as my next thought was, “You dummy, Alana is Alan,” which was one of those revelation moments for me. I had viewed the two as separate entities, so it was if I had just discovered there is no ‘they,’ but only one.

My grandson unknowingly helped me gain a better understanding of Alana’s transition process. He came bopping through the house one day with earphones hanging down to a pocket which held his iPod. I had the thought, “My, how that child has grown. It seems like such a short time ago I was changing his diaper.” I began a short trip down memory lane remembering him as a baby, a toddler, a little boy, and now a pre-teen.

Personally, I have also made extreme visible physical changes as a weight loss surgery patient who has lost over 100 pounds. After losing the weight I also lost a few friends. I can only assume because my appearance had changed, they somehow viewed me as someone other than my ‘old’ self. This assumption is based on the way I was treated after my weight loss compared to before the weight loss. And that’s exactly what I initially did with Alana … I viewed her as being someone different because of a change in appearance.

It took me a long time to learn what I believe every transgender person already knows … the person is the same … it’s just the process of evolution that makes people seem ‘different’ … and that’s true for all people.

These days I choose not to view Alana as changing, but rather evolving. I’m so very thankful I realized my friend and former lover is the same person they have always been … a realization that lead me to marry Alana in December 2008.

If you know someone in the transition process who says to you, “I’m the same person I’ve always been,” believe them because they are the same … REALLY!

This Trans Voice: “Just Trying to Live” by Bella Rose